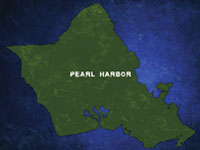 Early on 7 December 1941, six aircraft carriers of the Imperial Japanese Navy brought some of Japan's most skilled pilots and hundreds of well-equipped aircraft across the Pacific Ocean with the intent of disabling the US Pacific Fleet before it could enter the fight. After two hours of bombing and strafing by "Val" dive bombers, "Kate" torpedo planes, and "Zero" fighters, nearly 2,400 American lives had been taken and a country of isolationists clamored for war.

Giles Bacon grew up in Des Moines, Iowa and enlisted in the US Marine Corps in 1939. When the Japanese attacked Pearl Harbor, Private Bacon was serving as an MP at the brig on Ford Island. During and after the attack Bacon helped pull sailors, many of whom were choking on oil, from the water. 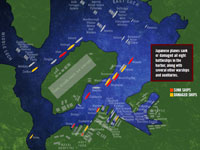 Watch the action unfold as the story of the invasion of Pearl Harbor is told through interactive maps, oral histories and timelines.